The episode, titled “When the Moon(shine) Hits Your Eyes,” will feature an old moonshine still that was in the lobby of the theater and is replaced with an aquarium. Also shown will be scenes from the actual “Hatfield and McCoy Dinner Show” as well as the tank reveal to the cast members and to David Fee and Jim Hedrick, co-owners of the theater. 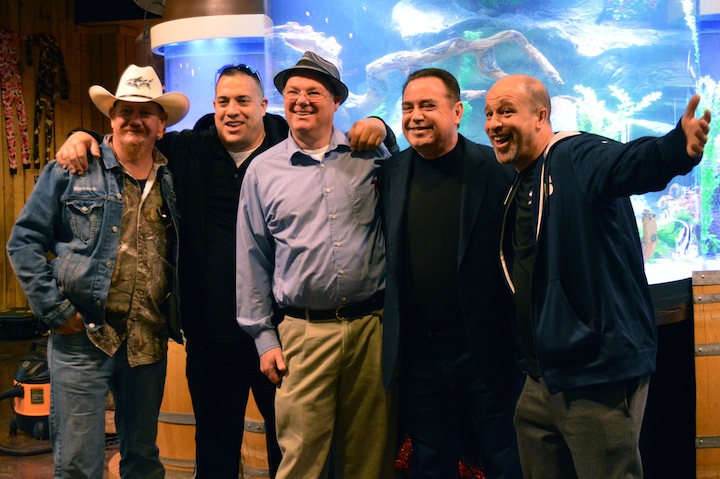 The reality show features King and Raymer traveling all over the world designing one-of-a-kind, custom-made outrageously themed fish aquariums. They have created tanks to look like pyramids, phone booths, cars, trucks and much more. Also featured in the show is Robert “Robbie Redneck” Christlieb.

Spoiler Alert:  The Jan. 16 episode will feature a 1,200-gallon fish tank in the shape of a moonshine still with a copper dome. Next to the still are two smaller tanks shaped like moonshine jugs. The tank weighs almost five tons. Inside the tank are more than 50 fish.  The Hatfield family is represented by a species of fish known as a hi-hat, and the McCoy family is represented by the koi fairy wrasse. Other types of fish in the aquarium include surgeonfish, angelfish, puffers, snappers and what else, but triggerfish! It is a saltwater tank with a freshwater theme.

When the tank was revealed, the cast, dressed in their show costumes, ran into the lobby to see the aquarium. Both families “hollered,” clapped, cheered and fired their guns, loaded with blanks, and then started to play their instruments. There was even a live pig named “Lou Lou” on hand that squealed with delight.

Fee, president and chief executive officer of Fee/Hedrick and co-owner of the Hatfield and McCoy Dinner Show said, “We are delighted that the Animal Planet ‘Tanked’ TV series chose the Hatfield and McCoy lobby for their show. We encourage people to watch the show this Friday night and to stop by the lobby of our theater to see our moonshine still tank.”  More than two million viewers will see the segment on Animal Planet.

“The Hatfield and McCoy Dinner Show” is currently running and tells a hilarious story inspired by real life tragic events. The musical clogging show is full of comedy, romance, forgiveness and laughter with many twists.

For more information about the show, visit www.HatfieldMcCoyDinnerFeud.com or call (865) 908-7469 (SHOW).  The Hatfield and McCoy Dinner Theater is located at 119 Music Road between traffic lights 0 and 1 on the Parkway in Pigeon Forge next to the Titanic.

The Fee/Hedrick Family Entertainment Group, one of the largest show production companies in the Southeast, is now in its 20th anniversary season. The show is part of the Fee/Hedrick Family Entertainment Group that includes “The Comedy Barn®”, the “Smoky Mountain Opry” and the “Blackwoods Morning Variety Show” featuring the Blackwoods. The company will open a new show, “Magic Beyond Belief,“ in March. The company also owns Happy Days Diner, Chef’s Catering and a website, http://www.seepigeonforge.com that helps guests plan their entire Smoky Mountain experience online.

Ticket prices for The “Hatfield and McCoy Dinner Show” are $49.95 plus tax, and children are free. Group rates are available for groups of 15 or more. Fee/Hedrick is currently running a special combination show deal that offers customers the opportunity to pay only $15 plus tax for “The Smoky Mountain Opry” when they buy the world-famous “Hatfield and McCoy Dinner Show.”