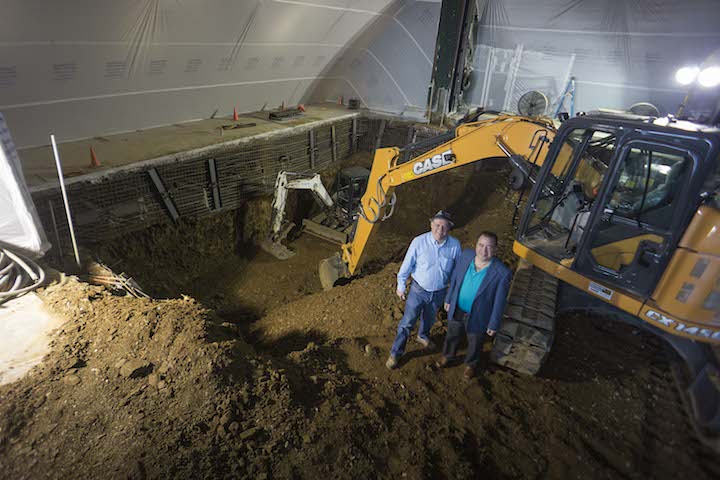 PIGEON FORGE, Tenn. (February 2016) – “The Hatfield and McCoy Dinner Show” in Pigeon Forge, Tenn., is taking the plunge and undergoing a multi-million dollar renovation. After several years of success with “The Hatfield and McCoy Dinner Show,” theater co-owners David Fee and Jim Hedrick are announcing their plans to add a high diving water element to the show as well as new cast members and trained animals.

“The Hatfield and McCoy Dinner Show” will enhance audience favorites from its current feudin’ show and will feature new high divin’ hillbillies, waddling ducks, diving dogs of all shapes and sizes, and even diving pigs who will tromp and wade and paddle throughout the water area with many unusual special effects.

“While the Hatfield and McCoy feud may be the longest running rivalry in history, both famous feudin’ families are putting up their guns temporarily to make a splash in Pigeon Forge,” said theater co-owner, David Fee, president and chief executive officer of The Fee/Hedrick Family Entertainment Group.  “Our new show additions will include a transformation of the current stage into an Olympic-sized 22-foot-deep diving well.

“After countless times of seeing water shows such as ‘O’ by Cirque du Soleil and Le Reve in Las Vegas, I wanted to bring our version of water technology to Pigeon Forge,” Fee said.  “The current performance stage will be transformed from a dry stage to a huge diving well that seemingly appears and disappears within seconds. It is going to be super cool! The stage floor will go up and down and will be capable of stopping at various levels.”

“’The Hatfield and McCoy Dinner Show’ was an innovative concept for my business partner, Jim Hedrick and I,” Fee said.  “The show has been successful beyond our wildest dreams. We change up the show each year for repeat visitors, and we have music and clean comedy that appeals to all generations.

“Fee/Hedrick Family Entertainment Group strives to bring new types of entertainment to East Tennessee. Pigeon Forge has never seen anything like this before,” Fee said. “We are proud to be the first to take feudin’ to a higher level.  And yes, we still will serve our famous ‘All You Can Eat’ dinner.”

The theater stage and performance areas closed Jan. 31, 2016, and are undergoing several weeks of renovations. However the box office remains open. “The Hatfield and McCoy Dinner Show” will reopen after renovations with the current show. The owners expect that the new elements of the show will then be rehearsed and gradually added for a grand opening event sometime late spring.

“’The Hatfield & McCoy Dinner Show’ was created to be funny,” Fee said.  “We are adding more comedy and fun to the show. You will need to come and see Granny’s way of doing a cannonball into the pool.

The “Hatfield and McCoy Dinner Show” is a hilarious hit production inspired by real-life events that will put an ‘All You Can Eat’ four-course mountain feast in people’s bellies and a smile on their faces as they watch a lively talent competition between Pa Hatfield and Ma McCoy and their clans, where the battlefield is the stage. This two-hour live show offers loads of laughs, including a rowdy battle at a barn dance, extraordinary country, bluegrass, and gospel vocal and instrumental musical performances, and award-winning hillbilly musicians, cloggers, and fun barnyard animals. The feud is kicked-off most every day at 5 p.m. and 8 p.m., with occasional 2 p.m. matinees. Guests of all ages in the audience are encouraged to support their own side of Hatfield or McCoy “kinfolks.”

For more information about the show, visit www.HatfieldMcCoyDinnerFeud.com or call (865) 908-7469 (SHOW). The Hatfield and McCoy Dinner Theater is located at 119 Music Road between traffic lights 0 and 1 on the Parkway in Pigeon Forge between WonderWorks and the Titanic Museum Attraction.

The Fee/Hedrick Family Entertainment Group, one of the largest show production companies in the southeast, also owns and produces other major shows in the Smoky Mountains including “The Comedy Barn”, “The Smoky Mountain Opry” and “Magic Beyond Belief” starring Darren Romeo. The company also owns Happy Days Diner and SeePigeonForge.com, a vacation package website company.

The Fee/Hedrick Family Entertainment Group is currently running a combo deal for a show ticket to “The Hatfield and McCoy Dinner Show” for $54.95 plus tax, and for only $19.95 plus tax add on to purchase a ticket to “The Smoky Mountain Opry,” “The Comedy Barn”, or “Magic Beyond Belief starring Darren Romeo.” With the purchase of a combo deal adult show ticket, children 11 and under are free for the second show. The child’s rate for “The Hatfield and McCoy Dinner Show” is $19.95 plus tax.  Group rates are available for groups of 15 or more.  For more information about the show, visit www.HatfieldMcCoyDinnerFeud.com or call (865) 908-7469 (SHOW).